Home Community Blog “Why I Give” – Caleb South ’15 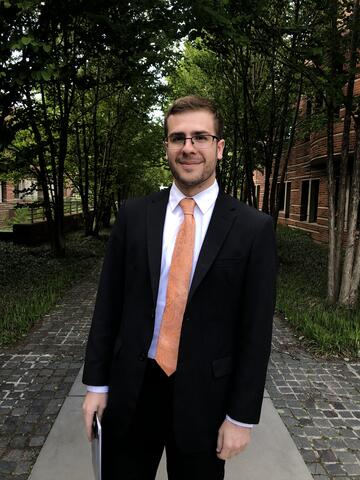 Caleb South ‘15 doesn’t think of himself as a philanthropist yet, which is surprising, because he graduated from Waterford only five short years ago and is already one of the School’s top 10 alumni donors. When I asked him what prompted his giving at such a young age, he said, “I give because of the generosity others have shown me. I wouldn’t have been able to attend Waterford if it wasn’t for them, and I want to pass on that good will.”

Caleb’s father also graduated from Waterford in 1998, a big reason why Caleb was so interested in attending. After graduating from Waterford, Caleb went on to attend Princeton University where he received a bachelor’s degree in mathematics in 2019. During his time at Princeton, Caleb had wonderful learning opportunities, such as spending the summer of 2017 traveling abroad in Paris, France, working with the International Panel on Social Progress.

When asked what prepared him for success at Princeton and beyond, Waterford was the clear answer. One of his favorite memories was competing in the ethics bowl led by former faculty member, Dr. Luana Uluave. Waterford’s team won the national competition in 2015. Caleb learned how to discuss difficult issues with classmates as well as strangers, a skill he has greatly valued since graduation. “Experiences like that happened all the time at Waterford. You gain so many skills outside of the classroom. Being able to attend changed my life, and I hope that my contributions will help shape the lives of others.”

In her spare time, Ann enjoys volunteering in the community for organizations such as Girl Scouts of Utah, the Association of Professional Researchers for Advancement, and the Junior League of Salt Lake City. Originally from the Jersey coast, Ann lives in Salt Lake with her husband, Morgan, two daughters, Abby and Lilly, and their two dogs, Rosie and Teddy.