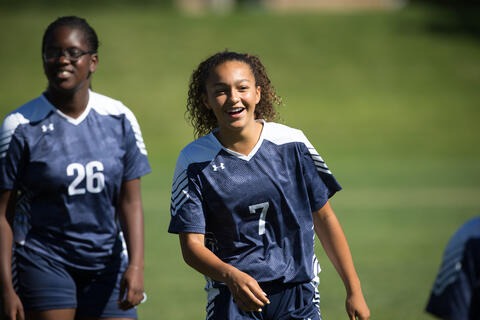 Seven C. ’22 was selected as Utah’s sole MaxPreps/United Soccer Utah Player of the Week! United Soccer Coaches uses results and statistics provided by MaxPreps.com to select one boy and one girl honoree from each participating state competing during the fall season.

Seven C. is the only player selected from Utah this week. She is adding to the team’s overall success this season.

“The Ravens Women’s soccer team is having a fun, competitive season. With a 7–1 record, our Ravens have found success on the field by utilizing their technical skills. Their success off the field includes community service projects, team bonding activities, and cheering on their fellow student-athletes!” – Coach Kimi Miyashima

The award, chosen by the United Soccer Coaches Association on a weekly basis, is an exceptional honor and we are very proud of Seven’s success.