The Legend Has Retired 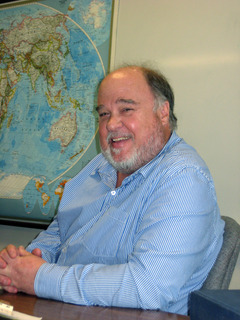 After teaching for thirty-seven years at Waterford School, Mr. Jan Van Arsdel is retiring. The setting of our conversation is hectic as Middle Schoolers run through the Concert Hall before their final exam, the last exam Mr. Van Arsdel will conduct as an educator. Mr. Van Arsdel, affectionately known as JVA, has taught AP US History, British Literature, and American Literature for over thirty years at Waterford. His students recently adorned his Humanities classroom with a brightly painted sign declaring, “THE LEGEND HAS RETIRED.” We discuss what he’s taught over the course of his career and his historical passions.

JVA expresses difficulty in naming one specific course that resonated with him, but privilege seems to be an important theme in our conversation. JVA says that he’s “ had Affirmative Action for years as a  privileged white male,” meaning his privilege as a white man has given him benefits that others have not received in their lives and careers. This acknowledgment is crucial to his teaching. Over the course of his career, Arsdel’s teaching has become more inclusive of voices that have been historically silenced. This is reflective of a larger movement to teach a so-called ‘new history’ that acknowledges the significant contributions made by marginalized populations over centuries. But the way we learn history, as he puts it, has always depended on the teacher. “You can only explain the world the way you understand the world, so hopefully the person explaining the world to you has a good understanding of it,” he says.

Perhaps this is a part of the reason that JVA feels that, “Waterford is the only place he could have taught.” This was his response when I asked how he feels about leaving Waterford. Before arriving at Waterford, he had previously taught at a university and an East Coast boarding school. However, Waterford teachers have, as JVA says, the “freedom” to explore passions that matter to them with their students. Passionate faculty are vital to the successful implementation of Waterford’s liberal arts curriculum.

“You can only explain the world the way you understand the world, so hopefully the person explaining the world to you has a good understanding of it.” -Jan Van Arsdel

JVA strives to inspire “curiosity” in history and “wonder” in English. Curiosity in history, JVA explains, revolves around wanting to know what happened in the past. He hopes that a course like AP US History, which he taught for many years, doesn't lead to only residual rote memorization. JVA wanted his students to actively engage with the past and develop a passion for the material. Wonderment in literature comes with connection to the material as well. Wonderment is not easily defined or measured, but JVA wanted his students to develop empathetic connections with different texts through reading, a lofty goal that was often accomplished within his classroom.

I asked JVA if he thinks students have changed over the course of his career. “Not fundamentally,” JVA says. He notes however a change in “willingness to engage with difficult texts.” Students, JVA observes, seem less willing to engage with difficult texts. This, he notes, partly stems from getting father and farther away from the time the texts were written. “Nineteenth century sentences are not Twitter sentences,” he puts simply.

This sentiment alludes to technology’s influence on our educational landscape. In an age with computers in our pockets, JVA has seen the need for instant gratification become a growing distraction over the course of his career. In response, he has become increasingly interested in environmental literature. He believes that mankind's interaction with nature is “a taproot on the human condition.” He acknowledges that at this late-stage in his career, “kids know that I have a cranky old man iPhone attitude. I think you need to look around at the natural world, look up from your phone.”

He was able to share and further explore that philosophy this year with an environmental literature class where “wonder” and “difficult” texts were explored by students.

For JVA, Waterford has been home. He was a member of the all-faculty wig band, “The Wildebeats.” He was the History Department Chair for fifteen years and member of the College Counseling office, among many other roles. He wrote a history of the Waterford School to commemorate its 25th anniversary. He had two daughters graduate from Waterford. The list goes on. JVA spent over thirty years exploring his passions with his students with the goal of inspiring wonderment and curiosity. As the students aptly put it, the legend has truly retired.