Home Community Blog Loss and Transformation: A Personal Reflection about 9/11

Loss and Transformation: A Personal Reflection about 9/11

The below is the transcribed assembly talk given to Middle and Upper School students by Ms. Apple this week. 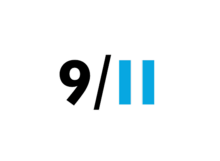 It is an incredible honor to speak with you today—about a day that none of you can remember first hand, but know has deeply impacted your life and the lives of many.

20 years and three days ago today, I sat down at a small desk in a classroom on a campus not too dissimilar to this one. It was my first class of the day (a Tuesday/Thursday class) of Chinese during my Sophomore year at a small college in Vermont which started if I remember correctly at 9:05 AM. One of my close friends sat down next to me and said, “a plane just hit the world trade tower”. We flippantly brushed it off, thinking it was a tragic…. But small…. Accident. What we didn’t realize was that at 9:03, shortly after he walked by the commons room TV to see the news of the first plane, a second plane had hit.

During passing periods on my way to my second class of the day, I saw tears, hugging, confusion, chatter, and my teacher in that class dismissed us almost immediately, telling us to check in on friends and loved ones.

I grew up five miles outside of New York, and for a tense 8 hours we believed my uncle was on one of the planes… a flight he took often for business. My aunt owned a shop on the top floor of the World Trade Center and I visited frequently. It all felt very close to my heart, and I felt very far from home. We stood in lines for hours that day to give blood, and found out there would be no need for it, as most inside didn’t survive.

We all felt a sense of loss. And yet just a short two days later, classes resumed. I remember questioning it—how can we pretend like nothing is wrong? How do we just go on? And it took me time to realize that it’s often what we must do. Continue our work, continue to support the community around us. Continue to grow, learn, and make a positive impact—things often taught here at Waterford too.

As you know, much changed after that day—breaking news, fear of the unknown, security on airlines. 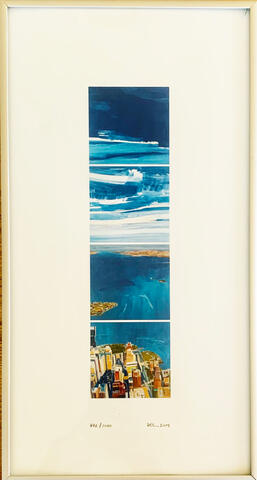 I want to show you a framed print named “Looking South”. The view in this print came somewhat indirectly into my life, and is now one I know quite well after walking past it in my home for almost 16 years.

My then boyfriend, now husband’s first job was with Fiduciary Trust, an investment company in New York city. During his first year there, he was gifted this print, a reproduction, #472 to be exact, out of 1,000 prints created of an oversized oil painting that hung in their office stairwell.

The oil-on-canvas painting was created by an artist named Daniel Kohn in 2003, privately commissioned by Fiduciary Trust. The painting avoids direct reference to the tragic event while encouraging viewers to take solace in a tranquil visual interpretation of loss—specifically the view from Fiduciary Trust’s office in the South Tower. The artist conveys an encompassing awareness of the 9/11 tragedy while provoking a reverie more peaceful than sorrowful in mood, allowing viewers to slowly remember and transform what happened that day.

This oil painting was subsequently gifted to the 9/11 Memorial and Museum. In a press release dated August 3, 2016, “Fiduciary Trust Company International, a leading global investment manager and the National September 11 Memorial & Museum, announced the installation of Looking South. The large-scale painting, donated by Fiduciary Trust, recaptures the views from the South Tower of the World Trade Center which, until 9:59 a.m. on September 11, 2001, had long been occupied by Fiduciary Trust, which lost 97 colleagues and business partners.”

On that morning, Fiduciary Trust lost their colleagues, bosses, and friends. A deep sense of loss. And those who survived likely had similar questions that I did on a much more dire scale… How do we go on?

Articles have been written about how Fiduciary Trust had back-up plans and were able to recover client information and set-up a makeshift office by the very next morning.

But they also chose, like many others, to never forget, to never forget the way that morning transformed their lives. So, they continued their work, continued to support the community around them. Continued to grow, learn, and make a positive impact… and to get better. When my husband worked there, and I hope still today, Fiduciary Trust put their employees first, knowing the dear cost of not having them. Their health benefits, family leave and work culture reflected it, and this print is a symbolic reminder of their commitment to care for their employees as best they can.

My thoughts are with all those affected by the tragic events of September 11, 2001, not just those in New York, but those in the Pentagon, on Flight 93, and all those who experienced deep personal loss. And as you leave today, let’s consider how we can continue our work, continue to support the community around us. Continue to grow, learn, and make a positive impact, and make progress and change without facing a tragedy first.

This large-scale painting now hangs in the 9/11 Memorial and Museum. I hope you have a chance to see it someday and reflect on the significance of this day and all that changed after it.

Amanda Apple joined Waterford School in early 2018. She hails from New Jersey where she attended Blair Academy. She then moved to the mountains of Vermont to receive her BA from Middlebury College while getting her first real taste for the outdoors. After graduating, she spent over a decade living in Brooklyn, NY marketing for the fashion industry, but continued to feel the pull for the outdoors–particularly once she started a family. When they relocated to Salt Lake City in 2015, she spent 2 years building up the marketing department for a local fashion and furniture company, but with her second son decided to reset one more time. She is thrilled to now be at the same school as her children and back in the liberal arts fold.

Amanda, her husband, two young boys, and a pitbull named Halley live near the mouth of Little Cottonwood Canyon. They can be found skiing when there is snow, and camping or diving into frigid alpine lakes when there is not.

An Expanded Summer at Waterford School